Haftar forces suffer string of defeats in battle for Tripoli

Sabratha, Surman, al-Ajaylat, Regdalin, al-Jumayl, Zelten and al-Essa, located northwest to the capital Tripoli, are now under the control of forces loyal to the Government of National Accord (GNA), according to Al Jazeera sources.

The GNA said on Monday its troops had seized control of three strategic coastal cities - Sabratha, Surman, al-Ajaylat - located between Tripoli and the Tunisian border.

Sabratha and Surman lie 60km (37 miles) and 70km (43 miles) west of Tripoli, respectively, nearly halfway to the Tunisian border. The loss is a major blow to the self-styled Libyan National Army (LNA), which is allied to Haftar and backed by the United Arab Emirates, Russia and Egypt.

Experts say the capture of these cities means the GNA has changed its strategy from "defensive to offensive mode" as the Tripoli-based government battles Haftar's forces for the past one year.

Haftar's forces, which have since pulled back to an airbase in the war-torn country's southwest, early on Tuesday fired rockets on Tripoli after suffering a string of defeats. 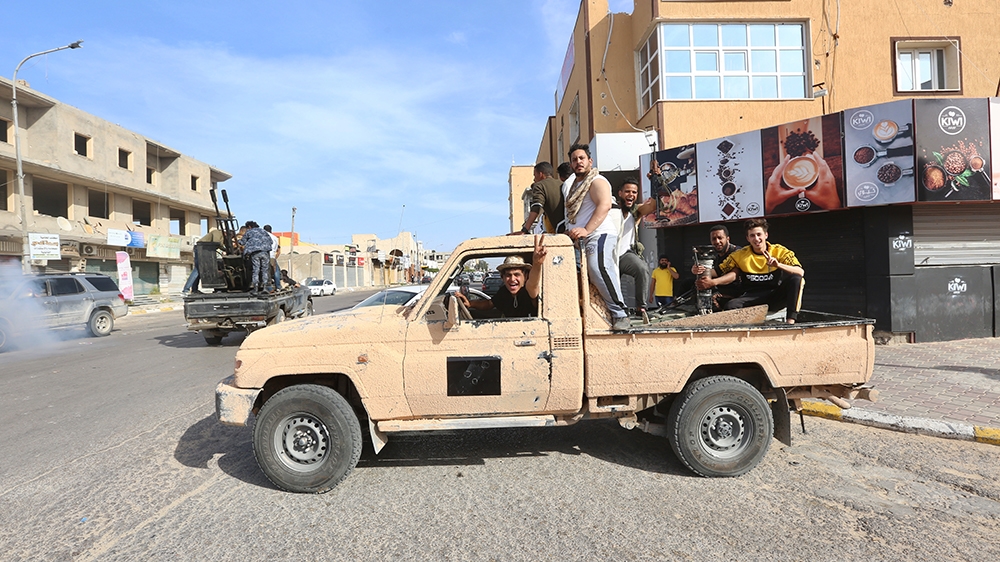 Several homes were hit around Mitiga airbase in the eastern suburbs, the capital's sole if intermittently functioning airport.

Al Jazeera's Mahmoud Abdelwahed, reporting from Tripoli, said the rockets caused fear and panic among the civilian population. "There is a mode of panic yet defiant" in the capital, he said.

There was no immediate word on any casualties.

The GNA, which has been battling an offensive against the capital for more than a year, accused the LNA of taking revenge against Tripoli's civilian population following their losses on Monday.

"The criminal militia and mercenaries have taken out their anger on residential neighbourhoods of Tripoli to avenge their defeat, firing dozens of rockets and missiles on the capital indiscriminately," spokesman Mohamad Gnounou said.

Sources told Al Jazeera the clashes killed nine soldiers from the GNA and more than 30 fighters loyal to Haftar, including a number of Sudanese and Chadian fighters.

The sources added the GNA used drones provided by Turkey to launch raids on Haftar's forces and the LNA.

"Military commanders say the latest advance by GNA forces can mainly be attributed to Turkish air support. Control of the skies has recently shifted in favour of the GNA, thanks to the Turkish air force," said Abdelwahed.

Libya, a large oil producer, has been engulfed in chaos since 2011 when longtime leader Muammar Gaddafi was killed in an uprising.

It is now split between two rival administrations: the Tripoli-based GNA, led by Prime Minister Fayez al-Sarraj, and the House of Representatives allied to Haftar and the LNA.

The United Nations says hundreds of people have been killed and more than 200,000 displaced since Haftar launched his campaign to capture Tripoli.

On March 17, the UN and nine countries called on Libya's warring parties to cease hostilities to allow health authorities to fight against the new coronavirus.

Repeated UN efforts to mediate a ceasefire have not yielded a permanent result and have been on hold since envoy Ghassan Salame quit in early March, citing health reasons.

Farhan Haq, the deputy spokesman for the UN secretary-general, said the world governing body is concerned continued fighting will hamper the country's efforts to contain the spread of the coronavirus.

"We, as you know, have been asking the parties to cease fighting ... we need to make sure that they can set aside [their differences] and work together to allow us to deal with the pandemic."

Russia ready for hypersonic missile talks with US, says Lavrov