Every school day, Amal Al-Qobani leaves her nine-month-old child for 11 hours, travelling from her house in Harib district of Marib to the governorate capital, Marib city. The bus ride, a difficult, pothole-ridden journey of about 100 kilometers, takes her and her classmates from Harib about two-and-a-half hours each way. But the destination, she says, is worth it: the University of Saba Region, a green, impressive campus that has become a source of pride for Marib’s local population. Amal studies at the College of Administrative and Financial Sciences, one of the many colleges established in Marib city during the war. Eman Mohamed, a mathematics student, also makes the long trek from Harib district. For her, attending university every day is a statement – a response to the negative perception many hold toward rural, tribal girls and their capabilities. “Girls in Marib are determined to become active participants in all fields, and I am proud that three of the outstanding students in my department are from Harib district,” she said.

Saba University’s vice president for student affairs, Dr. Ali Saif Al-Ramal, told Almasdar Online that an increasing number of girls from Marib are enrolling at the university. “They come from very far distances and various districts, including Serwah, Al-Wadi, Jawbah, Harib, Ja'adan, to attend their lectures at university every day, and this shows their insistence on studying,” he said.

Marib hosts one of the largest populations of internally displaced persons (IDPs) from all across Yemen, turning what was until recently a town into a rapidly developing city. As a result, the university has experienced a surge in attendance of female students, especially from major cities like Sana’a and Taiz, where relatively stronger education systems have traditionally included a larger number of women. What has come as a pleasant surprise to many, however, is that more and more women from rural areas of Marib are braving the long distances and inhospitable conditions to pursue a university education.

Previously, tertiary education in the governorate was only available through a college in Marib city that fell under the administration of Sana’a University, located in Yemen’s capital city. However, with Sana’a under the control of the Houthis, in November 2016 President Hadi issued a decree establishing a first-of-its-kind university in Marib. In addition to the College of Administrative and Financial Sciences, the University of Saba Region also contains the College of Education, Arts and Sciences, the College of Sharia and Law, and the College of Information Technology and Computer Science.

Additionally, the College of Education, Humanitarian and Applied Sciences in Al-Jawf governorate, which like Marib was previously affiliated to Sana’a University, is now administratively under the University of Saba Region. The university is named in reference to the proposed federal region of Saba, which is planned to include Marib, Al-Jawf, and Al-Baydha governorates. With many professors also having been displaced from educational centers like Taiz and Sana’a, Marib University also now boasts a highly qualified staff.

In the span of only a few years, Marib city has witnessed the transformation of a college with only about 300 students, to a fully-fledged university with about 11,000 students from all across the country, offering a total of 33 different majors. This feat is all the more impressive given that a major frontline has remained active throughout this period in Serwah district, only about 35km away from the university.

“My message to every girl is that she must do all that she can to complete her education, particularly rural girls, because we have entered the age of development and renaissance, and a person without knowledge is nothing,” Zainab Hussein, a student in the Department of Mathematics, told Almasdar Online. “Studying, especially at university, changed a lot in my life, including gaining self-confidence and making friends with colleagues from displaced female students and other things which are priceless.”

Zainab wakes up at dawn, leaving her house every day at 5:50 am and returning at 4:30 pm. She said she overcomes these challenges because she is driven to serve her homeland and produce a new generation that loves science. She especially loves mathematics, she says, because it is connected to many aspects of life and it has a fundamental role in stimulating and developing scientific thinking.

For Nahla Saeed Al-Habili, who studies business administration, surmounting the barriers to receiving an education is a necessity for two reasons: She wants to help restore Marib to its former glory, as a heart of civilization again, as well as to be able to keep pace with the requirements of the labor market in the governorate.

“The aim is to learn and teach others to serve our country and we will never give up, no matter what the conditions are,” said another student, Naseem Al-Qadai, who studies in the English Department. The prospect of earning a degree from the university gives her hope for a better future and a beautiful tomorrow, she said.

Nabila Al-Hamati, an activist and educator, told Almasdar Online that the number of girls who are going to university from various districts has increased noticeably. In her view, the reasons are manifold. Beyond the young women’s own drive and personal goals, there in many cases is growing encouragement from parents and increasing awareness in the community of the importance and value of education. Additionally, Al-Hamati said, the rising prosperity of Marib at this time, economically, socially, and culturally, is producing more job opportunities in the governorate and therefore a demand for qualified workers.

“The University of Saba Region is distinguished by its qualified and experienced staff and new specializations, and more importantly, the security situation in the governorate is much more stable than before,” she explained. “Also, the facilities provided by the university and the local authority, including the provision of buses to transfer the girls from all districts to the university.”

For his part, the vice president for student affairs, Dr. Al-Ramal, attributed the girls’ interest in pursuing a university education to the increased social awareness and encouragement from families, in addition to the keenness of the girls themselves to continue their university education. In his view, the facilities provided by the university for young women living far away, especially buses, have contributed greatly to encouraging them to continue their education, indicating the university is looking for all possible solutions and ways to help them continue their studying, including providing residence in the city of Marib.

With support from the local authority, led by Governor Sultan Al-Aradah, the University of Saba Region has provided 14 buses to transfer female students back and forth across the governorate, Dr. Ramal said. “We expected that rural girls would be reluctant to go to university, but what we saw is the exact opposite.”

Nasser Mohsen Saber, a tribal sheikh in Marib, affirms to Almasdar Online that girls in Marib now have a strong presence in various departments at the university and play an important role in education. “The tribes in Marib governorate have been keen to encourage and support girls to study,” he said. “The love of education that girls from Marib have now makes them challenge all difficulties to achieve their dream of continuing their university, particularly during this period the country is going through war.”

Sheikh Saber added that the encouragement from Marib’s tribes for locals to pursue education and science will contribute to shaping a better future for Yemen, and that educating children is an important means to serve the community. He called on the local authority in the governorate “to provide more support and encouragement to the girls in education and various fields to enhance her role in society.”

Yasmin Al-Qadhi, chairwoman of the Marib Girls Foundation, said young women from around Marib are increasingly recognizing their potential. “Like the other girls around Yemen, the girls of Marib seek to be independent and play a role in life and in shaping Yemen's future,” she said.

Yasmin voiced her hope that government agencies will work to continually provide employment opportunities for educated young women and to support university graduates to find suitable jobs, giving priority to female graduates. Pointing out the crucial importance of the buses devoted to transporting women from rural areas to the university, Yasmin also recently called on the local authorities to improve their quality and safety, as they frequently break down during the long trips between the university and rural districts. 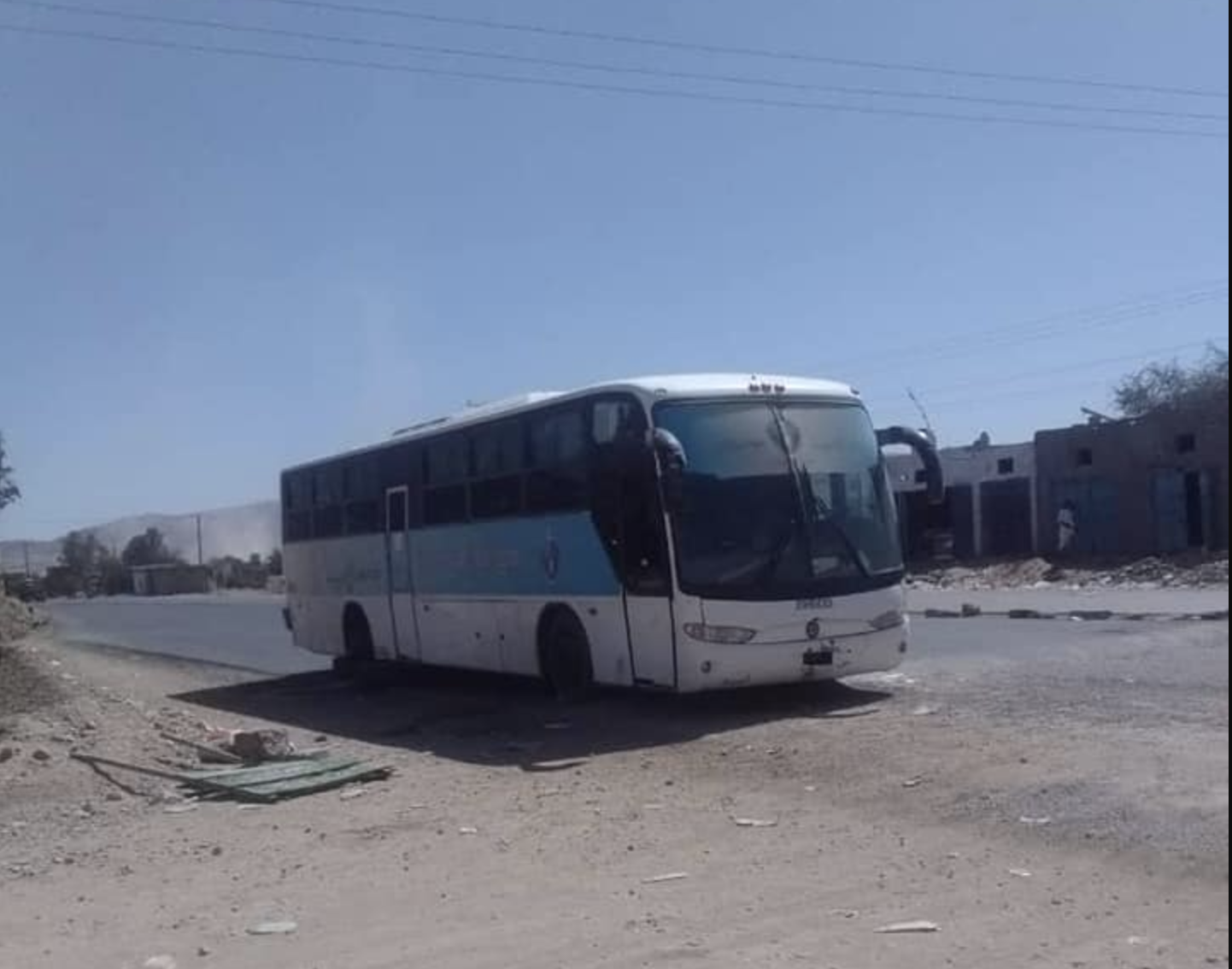 One of the university buses that female students use for transportation.

“She doesn't want to play the role of a spectator,” Yasmin said of the young women attending university, “but to be involved in decision-making, and to believe that her role would make a difference in this country, using education and a university degree as a weapon to face challenges in her life.”