Blocking internet and mobile phone networks on the battlefield has become a normal part of Houthi warfare - a weapon fine-tuned by former President Saleh and Gen. Ali Mohsen Al-Ahmar during the Sa’ada wars

In the battles for Al-Jawf and Marib, Houthis weaponize Sana'a-based telecom companies

The orders, forwarded to a small group of employees at one of the telecom companies in an email viewed by Almasdar Online, named three districts in the governorate of Sana’a, two districts in Marib governorate, five areas in Al-Jawf governorate and “all sites overlooking the confrontation areas.”

Because government and tribal forces fighting the Houthis rely heavily on the Sana’a-based telecom services to communicate, the Houthis have been able to block the internet and phone networks for military advantage. The blackouts also restrict the flow of information among civilians, allowing the rebels to shape narratives about the conflicts.

The telecom blockade wasn’t lifted until early March, by which time the Houthis had consolidated control over many of the locations listed in the email – most importantly, the Al-Jawf’s capital Al-Hazm – according to residents in the affected areas and a telecom worker who received the email.

Houthi forces have since set their sights on oil-rich Marib – and in recent weeks, they resumed blocking telecom networks there. The fall of Al-Jawf

The information blackout hit Al-Jawf in waves. On Jan. 23, the country’s three main mobile phone networks – MTN Yemen, Sabafon and Yemen Mobile – stopped working throughout the governorate. Less than 10 days later, land-based internet connections went offline, and landline telephones were cut on Feb. 14. None of the services returned until the fall of Al-Hazm city at the beginning of March, according to the director of the governorate’s information department Yahya Qama'a.

At various times during the month-long blackout in Al-Hazm, the mobile phone networks would briefly turn on and residents reported receiving calls from people they described as Houthi loyalists providing misleading updates about the unfolding clashes.

“They spread rumors about the fall of key positions in Al-Jawf and the targeting of government leaders,” Qama’a said, noting that the disinformation contributed to the general sense of panic as tens of thousands of people fled the governorate.

Others in Al-Hazm reported Houthi missile strikes when the mobile networks would briefly reconnect, insisting that the rebels use cell phone location technology to guide the missiles.

“We were facing a militia with the capabilities of a state,” he said.

The telecom blackouts help explain why strategic towns and military positions the internationally recognized government and tribal allies had held since 2016 fell so quickly.

Aside from the limited use of walkie talkies by some army units, anti-Houthi forces largely rely on the Sana’a-based internet and phone infrastructure to communicate on the battlefield. Several commanders told Almasdar Online that obtaining sophisticated military communication tools has been one of the Yemeni army’s top requests ignored by the Saudi-led coalition.

However, incompetence, infighting and a lack of coordination by the Yemeni forces and their Saudi backers also played a role in the swift military defeats, according to analysts.

Since the fall of Al-Hazm, tribal fighters have taken a more dominant role on the front lines defending Marib, and Saudi fighter jets have intensified airstrikes to levels not seen since mid-2018. The combined efforts have slowed Houthi advances into the northern and western fringes of Marib.

In mid-April, Houthis blocked internet and mobile networks in three districts in northwest Marib through which the main highways from Sana’a and Al-Jawf lead to Marib city, perhaps signaling a renewed push toward one of the government’s most important strongholds. 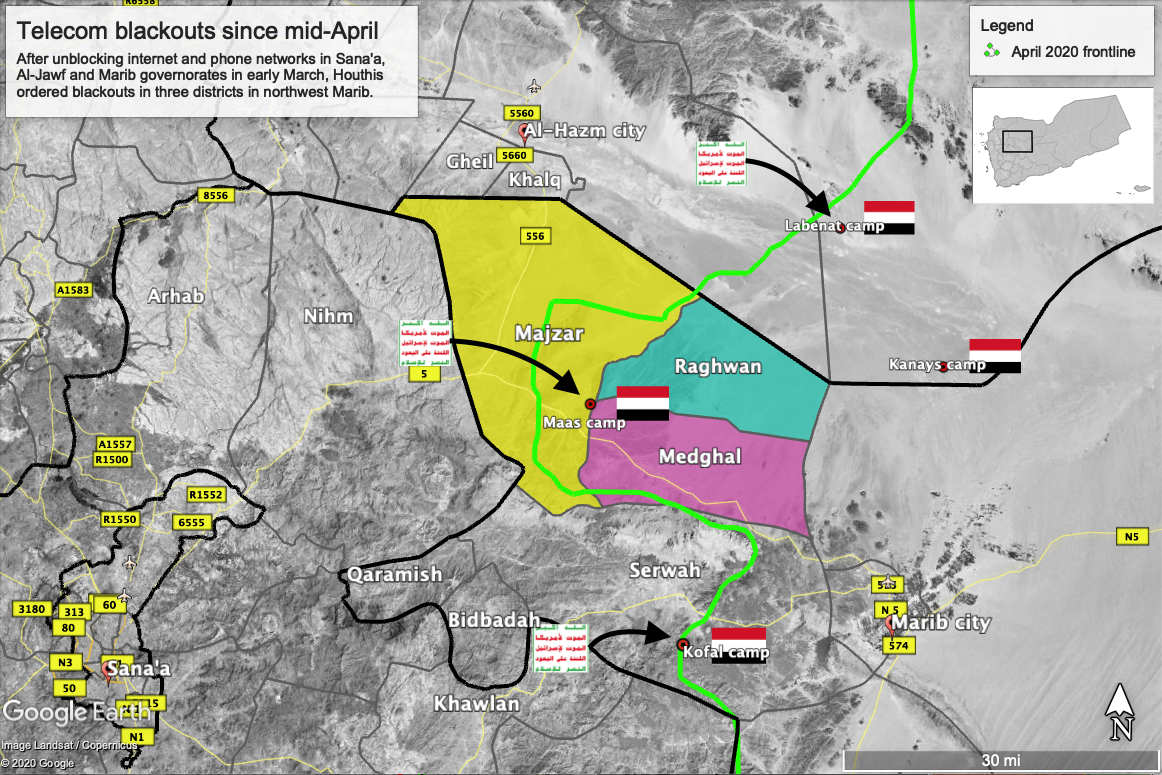 If the Houthis attempt to seize Marib city by force, blocking communications would likely be part of such a massive undertaking. Doing so would undercut the ability of the army, tribes and civilians to organize and defend the city of 1.8 million. Similar to what happened in Al-Jawf’s capital, an information blackout in Marib city would fuel chaos as residents flee the desert metropolis via two highways.

Journalists and civilians documenting the violence would be silenced.

“The telecom cuts cause great psychological stress as you hear a large number of rumors about the battles along with the lack of knowledge of what is really going on around you,” said Abdulilah Al-Hawd, a freelance journalist who was in Al-Hazm when the Houthis captured the city.

The Houthis’ weaponization of telecommunications is not unique in Yemen history, but a battle-tested tactic the rebels adopted from former President Ali Abdullah Saleh, who ruled the country for more than three decades.

The Houthis learned firsthand the effectiveness of information blackouts on the battlefield during the Sa’ada wars between 2004 and 2010. Saleh’s intelligence arm, the National Security Bureau, routinely ordered the blocking of mobile phone networks in the rebels’ strongholds in northern Sa’ada governorate as army forces attacked in an effort to crush the budding Houthi movement.

In 2011, Saleh stepped down after a year of popular protests, handing over the presidency to his deputy Abdrabbuh Mansour Hadi as part of a UN-sponsored political transition brokered by Saudi Arabia and other Gulf countries. A few years later, however, the wily ex-president entered into a political agreement with the Houthis in a bid to regain power.

Soon after seizing the central government in a military coup in late 2014, the Houthis and Saleh got to work installing loyalists and national security representatives in the Sana’a-based telecom companies to assist expanding military operations in the impending civil war.

Blocking internet and mobile phone networks has featured in numerous Houthi military offensives, including the failed attempts to seize Marib city in 2015, the ongoing siege of Taiz city, a six-month battle for the Red Sea city of Hodeidah in 2018 and the crushing defeat of Al-Hajour tribal fighters in northwest Yemen in mid-2019, according to a former telecom engineer with firsthand knowledge of the network cuts.

When Houthi forces are about to launch a new military offensive or need help during an ongoing battle, intelligence officials contact relay the locations to loyalists in the telecom companies, he explained. “The radio and transmission guys identify the sites, then send a request to the network operators who are able to ‘lock’ them remotely and observe whether any signals from other sites could reach that area,” he said.

During the blackouts, Houthi military forces have access to their own network, he added.

The Houthi-Saleh alliance ultimately disintegrated in 2017, culminating in the rebels’ assassination of the former president in December of that year. With unrivaled control over Yemen’s telecom backbone in Sana’a, the Houthis have tightened their grip on the sector to eliminate threats to their rule just as Saleh attempted to do during the Sa’ada wars.

The army general who spearheaded the Sa’ada wars, Ali Mohsen Al-Ahmar, is now vice president of the internationally recognized government. Much of his time in Yemen is spent in Marib, overseeing the largest concentration of army troops in the country. With President Hadi rumored to be suffering from health problems, Ali Mohsen is thought to be playing the role of commander-in-chief overseeing battles in the northern governorates, once again fighting the Houthis. Only this time around the Houthis have control of the telecommunications he helped weaponize at their expense.
--

Ali Al-Sakani contributed to this report.