On Dec. 13, 2018, in very cold weather, representatives of the government of Yemen and the Houthi rebels met at a resort near the Swedish capital of Stockholm. This was the first time in the history of the conflict that the two sides had agreed to commitments as part of the UN’s ongoing peace efforts, after negotiations had stalled for more than two years following the failure of the Kuwait consultations in August 2016.

The agreements reached on that day covered the port and city of Hodeidah, the release of prisoners, and the lifting of the siege of the city of Taiz. Unfortunately, no agreements were reached on the economy or the opening of Sanaa airport, despite being discussed thoroughly, because the Houthis were not engaged seriously.

Today, our disappointment is great because nothing has been achieved following any of the Swedish accords. The militias did not leave Hodeidah, humanitarian corridors and relief operations are still being looted in areas controlled by Houthi warlords, and there has been no release of prisoners. Thus, the issue was a bargaining commodity in the hands of the rebels. Taiz is still suffering as a result of an unjust siege. In recent days, the Houthis have even restarted their piracy against the international maritime routes in the southern Red Sea. One year on from the Stockholm meeting, all that has been accomplished by the UN Mission to support the Hodeidah Agreement were five joint cease-fire monitoring posts in Hodeidah. The cost of the mission’s operations for 2019 exceeds $58 million.

When I arrived in Stockholm last year, we in the government delegation were far from optimistic. We had spent a week at the beginning of September 2018 waiting for the Houthi delegation to join us in Geneva. This resulted in deep frustration and we were not optimistic that the Stockholm meeting would be any more successful. The Stockholm consultations, in my view, were not promising — especially when the military pressure on the Houthis was compromised by repetitive truces on the Hodeidah front.

I believe that, had the military operation that started in June 2018 fulfilled its strategic targets, it could have caused a turning point in the dynamics of the Yemen war and the subsequent final peace talks on Yemen because of the significance of Hodeidah as the Iranian supply channel for the Houthi rebels. The decision of the coalition — under the “good intentions” of giving peace a chance — was part of a greater attempt by the international community, but it failed to be taken seriously by Iran and its proxies in Yemen. For me, Stockholm was the beginning of the end, the self-defeat, and a gift for Iran and its proxies. Thus, it represented the climax of the military efforts in Yemen.

It is worth mentioning that the approach of Saudi Arabia, the leader of the coalition, to the peace talks in Sweden was genuine in its search for peace. From day one of Yemen’s war, the Saudi leadership was emphatic in underlining the fact that the Kingdom has no expansionist ambitions toward Yemen; that peaceful settlement — not war — is the solution to Yemen’s problems; and that peace in Yemen should ensure stability and prosperity for Yemenis and their neighbors. Stockholm was another step taken by the Saudis toward this end.

It was evident in Stockholm that the EU and the hosting government had made tremendous efforts to persuade Iran to give peace a chance in Yemen. We learned that Tehran had instructed the Houthis to accept the consultations’ outcome. The Houthi negotiation strategy was based on a public relations campaign to enhance their image and was contrary to the explicit instructions of the government team to be more flexible, with the view of alleviating the suffering of the people of Yemen. The European intentions in Stockholm were genuine because the aim was to end one of the major conflicts in the Mediterranean neighborhood. However, Iran — through its Houthi proxies — was trying to weaken the American sanctions regime.

After assurances from the international community, our allies and friends, and after sincere commitments from the five permanent members of the UN Security Council (UNSC) and the UN secretary general, the Yemeni government agreed on the Stockholm outcome and was convinced of the seriousness of the international community to deal with Hodeidah. Today, it is proving to be a lost opportunity.

On a personal note, I was heavily criticized by some government activists, who held me responsible for “an incomplete agreement” despite the fact that the highest levels of government approved the outcome and I was merely a chief negotiator. It is worth mentioning that the government delegation was meticulous in making sure that any outcome would adhere to international law, the UN Charter and Yemeni sovereignty, its constitution and its laws, and would not undermine the role of the Yemeni government as an instrument to defend the vital strategic interests of Yemen.

Even the handshake with the Houthi high representative after the announcement of the Stockholm agreement was not left without critique. At that moment, I knew I was violating a taboo of the “political militancy,” but the human being inside me wanted to send a message to all Yemenis — including the rebels — that this was “enough” and to tell Mohammed Abdulsalam, the Houthi chief representative, that he is my brother despite all the miseries caused to Yemen and its people by the rebels. One year after that handshake, the Yemeni outlook is still dire, the warlords are more dominant, and my country is more devastated.

Over the past year, the Yemeni government has been open to many different ideas put forward by the UN special envoy to overcome obstacles in the implementation of the agreement to transform it into a real example of a trust-building measure. In my view, had the idea of bringing the government, the rebels and the UN together as envisaged in Stockholm been implemented, it could have built the trust needed, made a difference and maybe contributed to the comprehensive approach required to achieve a peace deal in Yemen.

Based on the last year, we should praise the efforts of UN Special Envoy Martin Griffiths, who is still working tirelessly to reach a breakthrough in the final peace deal despite concerted obstacles to keep him encircled within the Stockholm agreement, which has turned out to be the black hole of the Yemeni crisis. Griffiths was straightforward during an interview with the Saudi Asharq Al-Awsat newspaper a few weeks ago. He said that Stockholm was just “a humanitarian move to fill a gap but not a prerequisite condition to launch the political process. It includes specific measures to build trust, strengthen the political process, and not to block it.” I can add that the experience of trust-building measures was overtaken by recent events and we have to look forward to ending the war and starting comprehensive talks on security and political measures within the established terms of reference.

The vision for peace was expressed in the road map outlined by Griffiths in his article in the New York Times in October. It included: Empowering the institutions of the state in Yemen; the monopoly on force must be returned to the government of Yemen; no formations outside the state should be allowed to use violence to achieve their ends; the militias that fight over Yemen’s land must be replaced by the exclusive authority of the state; the government must be an inclusive partnership among the political parties that now take different sides; and the government must ensure that its country will not be used for attacks on neighbors through a compact between Yemen’s new leaders and its neighbors.

As we look at the Stockholm experience and learn from its shortcomings, allow me to define the red lines in the Yemeni conflict that I see taking shape. There is an urgent need for Griffiths to start political consultations between the government of Yemen and the Houthi rebels; the only road to peace in Yemen should be through the UN, according to the established terms of reference, and any attempt to undermine the UN’s efforts or create parallel tracks will derail the process; and a solution dictated to the government of Yemen or undermining the state institutions will have no chance to succeed and will rather contribute to the further fragmentation of Yemen, impacting the peace and stability of the region.

Finally, the key to the solution of the Yemeni crisis should be focusing on reforming, strengthening and reinvigorating the government of Yemen as an inclusive partnership and not undermining it. Thus, the government is what remains of the country’s sovereignty.

This article was originally published on the Arabnews 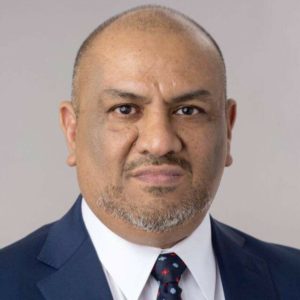 Khaled Hussein Alyemany is a former foreign minister of Yemen.