Despite optimism over the prospect of renewing the regular league, it will be an uphill battle as footballers and the YFA face ongoing difficulties

After a five-year absence, officials eye the return of Yemen’s football league

The Yemeni Football Association (YFA) announced on Jan. 30, 2020 that it will be launching the first and second division football leagues in Yemen, following a freeze that has lasted more than five years. In an official statement, the YFA addressed all clubs in the first and second divisions, asking them to provide the Federation with their approval to move ahead with launching the league in April.

According to the statement, the league will be structured based on the last season it was active, which was the 2014/2015 season. While it remains to be seen how many clubs will participate, given the ongoing lack of security in many areas of the country and a host of other challenges, Yemen’s top two divisions at last count had a combined 34 teams. The premier league has 14 teams, and will compete altogether via a round-robin schedule, while the second division has 20 teams divided into two groupings. At the time 2014/2015 season was cut short the Ahli club in Sana’a topped the premier league, while Taiz’s Al-Saqr club had won the championship the session before. 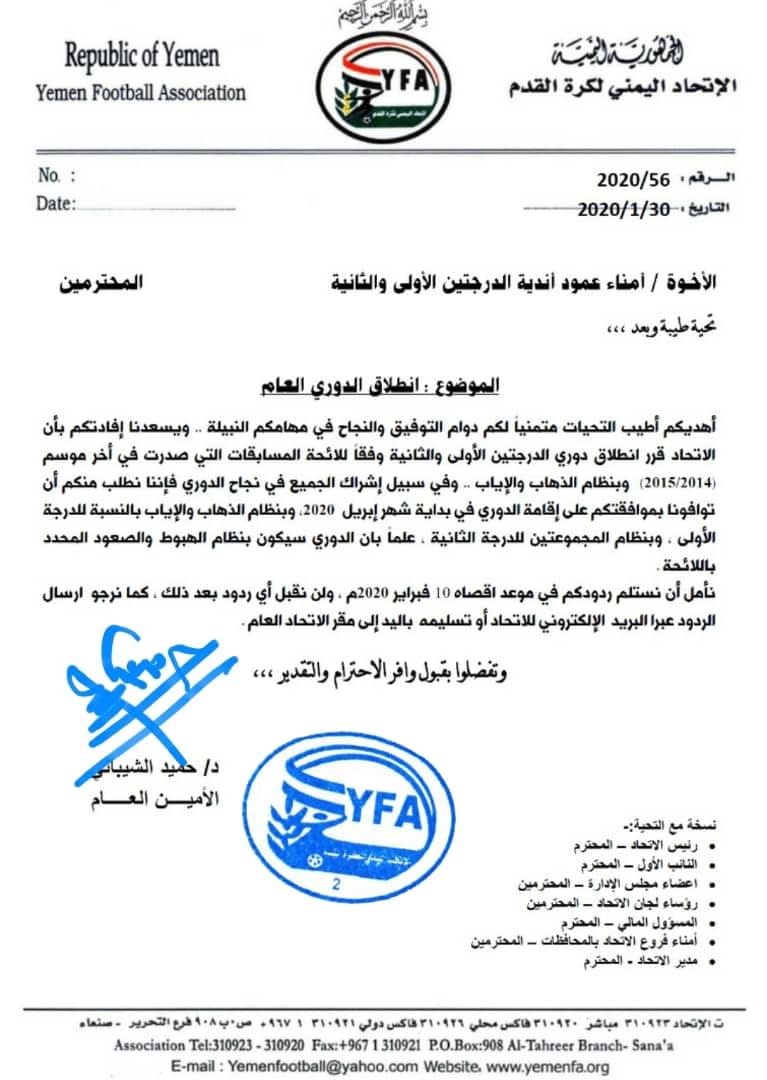 Announcement by the YFA to launch the football league in Yemen (January 30, 2020).

After the Houthis took control of Sana’a and began their armed expansion to other governorates, the league was put on hold partway through its 2014/2015 season. While Yemen’s national team has continued to participate in international tournaments abroad, the sustained intensity of the fighting has kept the YFA from resuming the local league in Yemen. Lately, however, football has been regaining steam in Yemen.

A number of friendly matches and mini-tournaments have been organized in late 2019 and the beginning of 2020, including most notably a two-week tournament in Seyoun, Hadhramawt governorate. Throughout January, eight different clubs from across Yemen participated in a tournament in Seyoun’s Olympic Stadium. The matches drew large crowds in the picturesque stadium, and were a source of optimism for Yemenis of all affiliations, as players living on either side of the frontline engaged in friendly competition.

Indeed, the success of this tournament and the momentum it created was part of the reason that officials decided to announce their intention to launch the regular football season. Another contributing factor is that Yemeni clubs have been absent from participation in the Asian Football Confederation (AFC) Cup and the Arab Club Championship. For these two competitions, it is stipulated that the participating club should be the champion of the official league in their home country.

The YFA announcement states that the first and second division clubs have until mid-February to confirm their participation in the league. Despite optimism over the prospect of renewing the regular league, it will be an uphill battle as football players and the YFA as a whole continues to face many difficulties. Most significantly, there is a lack of security in several governorates, and some stadiums are nearly within eyesight of the ongoing fighting.

Another major hurdle is the meagre funds available to the participating clubs. Yemen continues to suffer from the worst humanitarian crisis in the world and its banking sector has become one of the key battlegrounds in the conflict, causing the value of the riyal to plummet. Related to these challenges is that much of the infrastructure for sporting events has been destroyed or neglected for years, and not all venues are ready for use.

The YFA’s announcement prompted mixed reactions from Yemeni sports enthusiasts and local media commentators, with some pointing out that the return of regular football matches inside Yemen would provide a much-needed source of relief for people continuing to suffer the impact of the conflict, and help to put politics and other divisive topics aside. Moreover, it would help to rebuild Yemen’s sports infrastructure and improve the skills of the country’s athletes.

Others, however, see the resumption of the league as a risky adventure that should not be implemented out of concern for security reasons. As some commentators have pointed out, with multiple clubs being based in Sana’a, Ibb, Taiz, Aden, among other governorates, they are spread across territory effectively controlled by three different authorities: the Houthis, the government, and the Southern Transitional Council (STC).

An official from the Yemeni Football Association told Almasdar Online that the reactivation of the regular league will send a message of peace to the world, and will contribute to the return of community activity in the field of sports, in addition to the technical benefit it will provide for the national teams.

Sports journalist Samir Al-Qasimi voiced a different view, saying the decision by the YFA at this time is motivated by another reason: the Federation does not want to reject the demands by FIFA to restart the league. In Samir’s view, rather than issue a rejection to FIFA directly, they have transferred this burden onto the various local clubs to decline their participation, because they are aware of the difficulty of holding competitions amid the ongoing conflict.

For his part, Alaa Al-Sassi, a former member of the Yemeni national team and Hilal Al-Hodeidah club, voiced yet another concern: the scheduled date of resuming the league, in April 2020, coincides with the holy month of Ramadan. It will therefore be difficult to hold competitions during the day because players will be fasting, he explained to Almasdar Online, and at the same time it would be difficult to play in the evening after breaking the fast because most of the stadiums do not have sufficient lighting to illuminate the pitch.

In response to these various concerns, the Federation official said they are aware of the extent of the difficulties that may be faced in reactivating the league, but that they are relying on the large public interest and support for the game, which was sparked by the trips last year through Yemen of the national and junior team. Images of the public celebrations that the national team were met with on their trip through Marib, Sana'a, and Aden, as well as being honored in events in Qatar and Saudi Arabia, were seen as evidence that football has the ability to unite Yemenis perhaps more than anything else.

At the same time the football tournament was underway in Seyoun, in neighboring Marib a major military escalation between Houthi and government forces was unfolding. The tournament went on with jubilant crowds, however, sending a message to the political elite that football is no longer a luxury for Yemenis, but a necessity.

War economy flourishing behind the walls of Houthis detention centers